A sincere thank you to the area businesses that have generously provided our winners with the following prizes:
Grand Prize: One night stay at CopperLeaf Boutique Hotel, downtown Appleton
First Prizes: $75 toward a stay, dinner or golf at Bridgewood Resort Hotel & Conference Center in Neenah
Second Prizes: $50 toward custom framing at Foxley’s Gallery LTD in Appleton
Third Prizes: $25 gift card from Wildbird & Backyard in Appleton “Downtown Menasha Columns” by Scott Francis, Menasha
Century-old, 22-foot columns repurposed as a focal point in downtown Menasha stole the show in the 16th Annual Photo Contest this year. Taken by Scott Francis, the photo was captured on a night with a bright sunset and moody clouds, the perfect contrast to the red pillars (the lights are programmed to change colors). “The view, lighting and subject represent the modernization of downtown Menasha while maintaining some of its history,” Francis says.
“I love the contrast of the red and the dark in this one,” Judge Dustin Mack says. “It’s different and cool to see the area highlighted.” 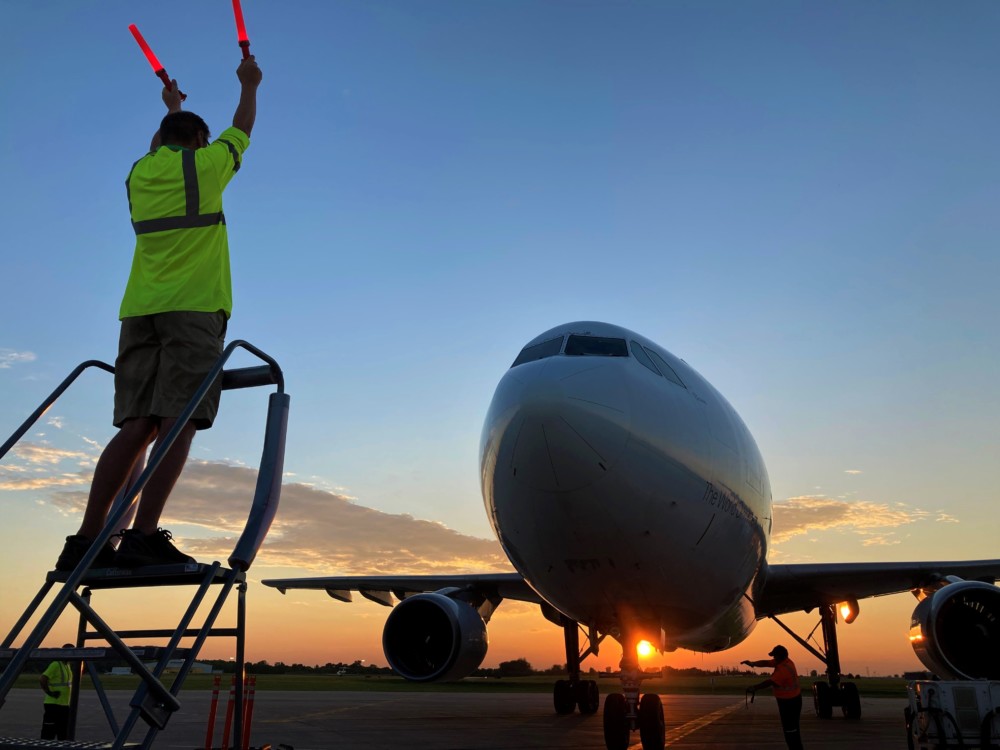 First Place: Marshaling the Behemoth by Ken Kemper, Appleton
“During weekday evenings I work at FedEx Appleton Airport and am part of the team that loads the mighty Airbus A-300,” Ken Kemper says. “My coworker, Kyle, was marshaling Flight 325 into its exact position on our ramp and the setting sun was perfectly aligned with the aircraft. I had time to snap a couple pics with my iPhone as Kyle was guiding the flight crew into perfect positioning.”
“It’s a great shot and a nice moment to give credit to the people who are working behind the scenes,” Judge Moorefield says. Second Place: The Youth’s Appleton by Marisa Picken, Appleton
“I really like the action of this photo,” Judge Maddie Uhlenbrauck says. “It feels like it has some life to it.”
Captured by Marisa Picken behind Bagelicious and Bonafide downtown, Marisa Picken spent the afternoon taking photos of friend Devarius on what was previously the YMCA ramp.
“I think we see a lot of pictures of what Appleton is like through adult lenses,” she says. “I thought it would be cool to showcase what the youth do in Appleton and how they see it.”
“It’s unexpected,” Judge Moorefield adds. “I like the gritty nature of this, how youthful it is with the skateboarder.” Third Place: Peaceful Fishing by Kevin Abing, Little Chute
When Kevin Abing arrived at Sunset Park and noticed three fishermen, he knew it would make for a great image.
“I decided to go out for sunset pictures at Sunset Park,” Kevin Abing says. “When I arrived I walked down to be at eye level with the Fox River and I spotted (them). I knew I had to capture the sunset with the fishing boat and fishermen. As they say, ‘The rest is history.’” First Place: The Saint Mary Steeple by Joe Lukasik, Neenah
Joe Lukasik was taking fall foliage pictures around Doty Island when he came across the Winterberries along the south shore of Menasha Channel.
“Looking across the channel, I felt that the iconic Gothic steeple of St. Mary church against a gray sky provided a great backdrop for the bright red berries, giving the image a melancholy late-Autumn vibe,” he says. “My family are parishioners of St. Mary and a canvas of this picture has hung on my living room wall since taking it.”
“The perspective of it really brings you in,” Moderator Sarah Elliott says. Second Place: A Perfect Start by Alan Mullen, Appleton
Alan Mullen is always looking for the opportunity for sunrise photos when he’s near the water. While at Kimberly Point Park in Neenah last August, he found this one.
“The lighthouse was an intentional stop while I was passing by working,” he says. “The people there watching the sunrise was an additional bonus that created more interest, the sun not being too far up made me stop for sure.”
“It’s just a well-done shot,” Judge Moorefield says. “It’s interesting that it’s all in shadow with the little people at the bottom.” Third Place: Beautiful View by Kevin Abing, Little Chute
“I really love the perspective of this one and how the sky was captured,” Judge Moorefield says. “There’s something kind of enigmatic about it.”
Photographer Kevin Abing is always looking for ways to tolerate Wisconsin winters, and capturing photos is one such way he does so.
“I went early for sunset pictures at the lighthouse and sure glad I did,” he says. “Once I arrived I noticed the beautiful low clouds over Lake Winnebago. I thought a picture with the low clouds, blue sky, lighthouse, bridge, bare trees, snow and ice would make for a nice winter view photo.” First Place: Steeple in the Pines by Ken Kemper, Appleton
After a heavy snowfall in January 2021, Ken Kemper noticed the undisturbed snow in the trees that contrasted with the “promise of a bright blue sky.”
“I have always admired the architecture of Zion Lutheran Church (it is quite photogenic too),” he says. “About a block east of the church is a grove of tall pine trees, which caught the early rays of the sunrise nicely. A wide angle lens made for a better photo allowing for more tall pines in the pic.” Second Place: For Your Eyes Only by Harold Boccheciamp, Neenah
“The eagle’s face is hilarious!” Judge Uhlenbrauck laughs. “It’s such a cool moment to capture.”
“Being new to the area, I think it’s so cool that there are so many bald eagles here,” Judge Moorfield adds. “It’s amazing to see like this.” Third Place: Landing In the Sunrise by Ann Mitchell, Appleton
Ann Mitchell was on the Fox River near the dam close to Vulcan Heritage Park when she noticed a handsome pelican coming in for a landing.
“I was watching and photographing the wildlife on the Fox River, at sunrise… I started snapping shots of him and was blessed with the sun hitting him as he was landing,” she says. “I decided to send it to you because it’s the best image of a pelican that I’ve captured in the Fox Cities. We are lucky to have them visit every year!”
“I like that it’s in motion,” Judge Dustin Mack says.
“I like the contrasting colors of this one,” Judge Karl Volkman adds. “It stands out as something we could all see on a given day in the Fox Cities.”