As a student who came back from studying abroad in France six months ago, how refreshing it was to walk down College Avenue one day and see a food truck selling real French crêpes! A staple on almost every street corner in France and in food truck founder Amri Prince’s home country, Tunisia, Le Prince French Crêpes is an unexpected and welcome addition to our downtown Appleton. You may have read a little about Amri and his food truck in this month’s edition of FOX CITIES Magazine (if you haven’t, read it here), but I was immediately intrigued to learn more about how in the world crêpes made their way to the Little Apple and who was behind it.

Amri Prince grew up in Tunisia and moved to Kaukauna, where his wife’s family is from, in 2012. He speaks Arabic as a first language, as well as a Tunisian dialect that he grew up with, which throws in a little French, Italian, and English. French is a second language to him, and English a third.

“A couple years ago I didn’t speak any English,” he says. Deciding to open a food truck presented him an opportunity to talk to new people, to encounter different minds and ideas, and to improve his English.

These weren’t the only reasons to open a food truck, though. “I like production in anything… I’m not the guy to wake up at … 6 in the morning to go [to the] factory… I want to be a little different.”

With this motivation, Amri began his food truck business, a smaller investment than a restaurant, in October of 2015, but why crêpes? At the base of the answer to this question is that crêpes are tasty! “I think it’s […] delicious. You can eat it anytime: breakfast, brunch, lunch…”

Amri’s menu includes both savory and sweet crêpes, his newest additions being pizza and taco crêpes. “I think I’m the only one making taco crêpes,” he says. He checks out other menus and what other food trucks are doing to stay on top of the game. 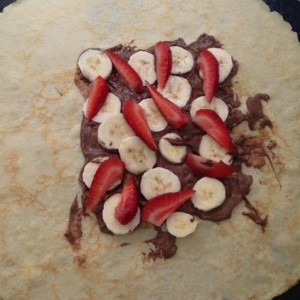 Amri is not professionally trained as a chef. “Actually, I don’t cook,” he says, but growing up in Tunisia he has a certain knowledge of crêpes from seeing crêpe carts and cooks all his life. “I learned a little bit, the technique, from YouTube. I took a couple months to learn [it], try[ing] everything at home, giv[ing] to family and friends.”

When he’s not working on his crêpe technique or menu, Amri is playing music. “I’ve made […] music for 24 years as a part-time job.” He’s a percussionist, playing primarily the Arabic hand drum, darbouka, but also the conga drums, bongos, the drum set and composing a little bit, as well. Amri played for a symphony for a couple years, has played in Oshkosh as a special guest, has done workshops in the Fox Cities, and does private lessons.

This summer when you are strolling down College Avenue in Appleton, take a minute to see a friendly face and enjoy one of Amri’s French crêpes. You’ll get an authentic taste of a different culture without leaving home. In the meantime, check out Amri’s business and music online: